An introduction to the city of Miami in South Florida. Includes information for both visitors and residents. See also our Miami-Dade County and Greater Miami travel guides. 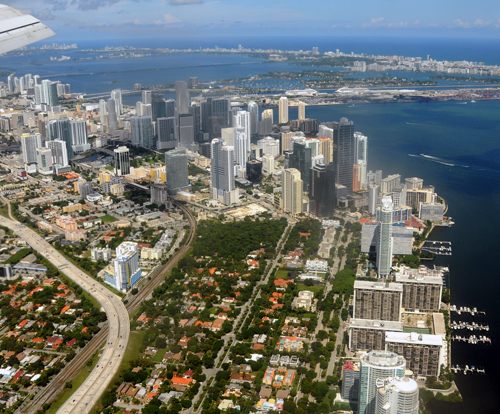 Miami neighborhoods are formed by the unique convergence of nature, landscape, and human events which create an identity that’s often quite distinct from what exists just ten minutes away. Sometimes this is very apparent as you travel from one such community to the next, at other times it is less visible and becomes an ongoing expansion of your awareness of all the sides of that identity. But the adventure of getting to know each of these neighborhoods remains consistently worthwhile.

North of Miami Beach, the affluent neighborhood of Bal Harbour is home to elite shops, dining, and hotels – but also uncrowded stretches of beach and open waters.

Coral Gables remains a distinct Miami area urban community that combines old-world style and new world inventiveness. Southwest of Miami you will find Coral Gables (the Gables) one of the first planned communities in the ’20s. It was designed by George Merrick with an architecture that is almost entirely Mediterranean with wide tree-lined boulevards. To get to Coral Gables take the Miracle Mile SW 22nd St. You will find high-end department stores very good restaurants, gourmet shops, and Bridal Shops. There is now a new free trolley system that makes the area very pedestrian-friendly. Wrapping its broad wings around the southern end of De Soto Boulevard, Merrick’s crowning achievement was the fabulous Biltmore Hotel

With its Biscayne Blvd. retro Fifties architecture, shopping, and dining venues, the Miami Modern upper east side district has become an insider’s favorite.

Districts of the City of Miami

The Allapattah District is located in the center of the City of Miami, just north of State  Road 112. In the past, it was known as “Railroad Shop Colored Addition”. In 1947 black families were forcibly evicted from this area through eminent domain to make room for homes, schools, parks, and other facilities for white families. Today Allapattah is again predominantly black.

An introduction to the Bay Point Estates District of the city of Miami Florida. It is bounded by Northeast 41st Street, Northeast 50th Street, and Biscayne Bay. There are about 250 homes in the community and all homeowners pay expensive homeowners association dues to cover the cost of 24-hour security, road maintenance, and other amenities. Bay Point Estates is am expensive gated community fronting Biscayne Bay in Miami’s upper east side. Homes range in price from about $1 million to $9 million. homes range in size from 3000 to 8000 square feet3,536 to 7,758 square feet. typically cost 1 million to 9 million dollars

The Brickell District is the southern part of Brickell Avenue Skyline is full of condominiums, hotels, and office building towers Lots of shops, restaurants, and cafes Population: more than 6000 Average resident income: 120,000. The Brickell District (usually just called “Brickell”) is divided into 2 sections;

Financial District is the area of downtown Miami along Brickell Avenue (US 1) and Brickell Bay Drive from south of the Miami River to Broadway. Referred to as the Manhattan of Miami”. Has the largest concentration of international banks in the United States.

Brickell Key is a man-made island in Biscayne Bay that is connected to Downtown Miami by a short causeway called Brickell Key Drive.

Coconut Grove (the Grove) now rivals South Beach Miami with all its Art Galleries, upscale cafes, and restaurants. It has come a long way from its 60’s image of writers and artists. Soon you will notice that there is a lot of big money around. The marinas with rows of multi-million dollar yachts. You may want to check out the Fairchild Tropical Garden. Open 9:30 to 4:30 The admission was $8 last time I was there it is located 10901 Old Cutler Rd and is one of the biggest Tropical Botanical Gardens in America.

The Coral Way District is located in the southern area of the City of Miami.

The district known as Downtown Miami is located in the east-central part of the city of Maimi. It includes most of the islands int eh bay, Miami’s central business district, and the Brickell Financial District. More like Buenos Aires than Boston, it’s perhaps DOWNTOWN MIAMI that shows the city at its most Latin. Downtown divides into distinct halves: big business and big buildings line Brickell Avenue south of the Miami River, while the commercial bazaar around Flagler Street to the north hums with jewelers, fabric stores and cheap electronics outlets. Latin culture is comfortably dominant here – from office workers grabbing a midmorning cafecito, or Cuban coffee, from tiny streetside cafés to the bilingual signage in almost every store. If at first, it may seem overwhelming, persevere: downtown is compact, holds two of Miami’s best museums and provides the clearest idea of Cuba’s continuing influence on the city.

Flagler Street is downtown’s loudest, brightest, busiest strip; at its western end is the Metro-Dade Cultural Center, an ambitious attempt by architect Philip Johnson to create a postmodern Mediterranean-style piazza. Art shows, historical collections and a library frame the courtyard, but Johnson overlooked the power of the south Florida sun: rather than pausing to rest and gossip, most people scamper across the open space toward the nearest shade. The center’s Historical Museum of Southern Florida at 1010 W Flagler (Mon-Wed, Fri & Sat 10am-5pm, Thurs 10am-9pm, Sun noon-5pm; $5, $6 combination ticket with Center for Fine Arts) provides a comprehensive peek into the region’s history. It has a strong section on refugees and immigration since 1960. A few yards away, the Miami Art Museum of Miami-Dade County houses a strong collection of post-1940 art and showcases outstanding international traveling exhibits (Tues-Fri 10am-5pm, third Thurs each month 10am-9pm, Sat & Sun noon-5pm; $5, $6 combination ticket with Historical Museum; tel 305/375-5000).

Beside Biscayne Boulevard (part of Hwy-1), on the eastern edge of downtown, is the Bayside Marketplace, a large pink shopping mall enlivened by street entertainers and food stands. Across Biscayne Boulevard, the Freedom Tower, built in 1925 and modeled on a Spanish bell tower, earned its name by housing the Cuban Refugee Center in the 1960s. Between December 1965 and June 1972, ten planes a week brought over 250,000 Cubans allowed to leave the island by Fidel Castro. While US propaganda hailed them as “freedom fighters,” most of the arrivals were simply seeking the fruits of capitalism, and, as Castro astutely recognized, any that were seriously committed to overthrowing his regime would be far less troublesome outside Cuba.

Fifteen minutes’ walk from Flagler Street, the Miami River marks the southern limit of downtown. Around 1900, the millionaire oil baron Henry Flagler extended his railroad, which had opened up Florida’s east coast, to reach Miami from Palm Beach. His Royal Palm Hotel (on the site of today’s Hotel Inter-Continental ) did much to put Miami on the map. One of the landowners was William Brickell, who ran a trading post on the south side of the river, an area now dominated by Brickell Avenue – the address in 1910s Miami. While the original grand homes have largely disappeared, money is still the avenue’s most obvious asset: its half-mile parade of bank buildings is the largest grouping of international banks in the US. The rise of the banks was matched by new condominiums of breathtaking proportions (and expense) but little architectural merit.

The Flagami District is located on the western edge of the city of Miami. It is the area bounded by Flagler Street, the Tamiami Trail, 57th Avenue (Red Road) and 77th Avenue.

The area known as Little Haiti is a district in the north-central part of the city of Miami.

An introduction to the Little Havana district of the city of Miami Florida. The district was named after the city of Havana which is the capital of Cuba and that country’s largest city. The neighborhood is a center of the Cuban exile community in the United States, but there are are also large enclaves of Cubans in Hialeah and other parts of the greater Miami area.

The Cubans impact on Miami, without question the most visible and largest ethnic group in this city, has been incalculable. Not like most of the immigrants that came to America. That traded one form of poverty for another. The first Cuban’s to Miami were middle and upper-class professionals fleeing the Fidel Castro regime. They had been used to the good life in Cuba as they arrived during the late ’50s and soon they had the same in Miami. Many of them or their children now help with the running of the city and wield considerable clout. With one of their own now in the US Senate.

Just a few miles west of downtown Miami you will find Little Havana and where many Cubans first set up home when they came to America. You will not find old men sitting around playing dominoes. Many of the now Cuban-Americans have moved to other places around Miami. You will find that now is mostly a mix of immigrants from other countries in Central America. Making this more of a working mans neighborhood and not for tourists. Still, if you can try and grab some lunch at one of the small neighborhood restaurants.

On June 7, 2006 Miami’s Historic Preservation Board voted unanimously to create a new historic district to protect a neighborhood of 1950’s motels and other “Miami Modern” buildings in a 30 block section of Biscayne Boulevard. The MiMo District will include the buildings along Biscayne Boulevard between Northeast 50th Street to Northeast 77th Street. The new district includes more then 50 “architecturally significant” buildings, many built in a style known as “Miami Modern” that appeared after World War II

Watson Island is a diamond-shaped, 87 acres, man-made island in Biscayne Bay. It is connected to Downtown Miami and the South Beach neighborhood of Miami Beach by the MacArthur Causeway. The island is most well-known for being the home of the Miami Children’s Museum, the Jungle Island Theme Park, the Miami Yacht Club, the Miami Outboard Club, Japanese Gardens, and a seaplane base.

The Morningside district is located on Miami’s Upper Eastside near the neighborhoods of Bay Point, Belle Meade, Bayside, Palm Bay, and Shorecrest. All of these districts are within walking distance of Biscayne Bay.

Attractions in the City of Miami
Information about the most popular visitor attractions in and near downtown Miami, Florida.

Restaurants in the City of Miami
Bongos Cafe, the Capital Grille, Morton’s Steakhouse, the Hard Rock Cafe, and other restaurants in downtown Miami, Florida.