During your Miami visit, Don’t miss some of the hottest action in the nearby island city of Miami Beach.

Both the sun and the moon shine brightly every day over the playground called Miami Beach. The non-stop excitement is reflected on the covers of national and international glamour and travel magazines where the trendy South Beach area, SoBe, hosts thousands of models and photographers looking to capture the area art deco architecture and stunning beaches.

Encompassing 17 islands in Biscayne Bay, Miami Beach has enchanted visitors with its incomparable beaches and social scene since the early 1920s. It was during the boom time of the ’20s and 30’s that the scores of small art deco hotels were built to accommodate pleasure-loving hordes from colder climates. Beginning in the late 1950s these modest tourist digs gave way to grand resort complexes (like the fabulous Fontainebleau). It is in SoBe’s Art Deco District where today’s action is — from Ocean Drive’s magnetic stretch of restaurants, clubs and lovingly renovated art deco hotels to the trendy shops, restaurants, and cafes on Washington Avenue, to the cultural phenomena taking shape on Lincoln Road. Art Deco Weekend is the big beach blowout, but there’s almost always something special going on.

Today, the art deco-fueled renewal is certainly packing them in, but it’s a diversity of attractions that keep the crowds happy. Of course there are the fabulous beaches, and all the recreation that goes along with them, but, increasingly, there are also world-class cultural draws, such as the New World Symphony, Miami City Ballet, the Art Center South Florida, and a visible presence of a community of dancers, actors, artists, and designers.

This cultural side of South Beach is a prominent part of what Lincoln Road has to offer. Once one of the most elegant shopping streets in the country, Lincoln Road was redesigned in the 1960s by legendary architect Morris Lapidus as America’s first pedestrian mall. Now it is envisioned as the center of the new Miami Beach — a kind of link between South Beach and the mainline attractions, such as the Miami Beach Convention Center, the Jackie Gleason Theater of the Performing Arts, and the Bass Museum of Art.

The South Beach district of Miami Beach has the liveliest nightlife scene in the Miami area. Occupying less than two square miles on the southern tip of Miami Beach, South Beach’s subtropical sandbar has an identity all its own as the American Riviera. Here, life is celebrated as one chic, 24/7 street party in an art deco playground lined with over 150-night life venues of bars, pubs, and clubs.

South Beach ‘s beautiful architecture makes it a favored location for films, music, and television shows, as well as a backdrop for fashion shoots. The Art Deco District boasts the largest concentration of the 1920s and 1930’s architecture in the world, earning a listing in the National Register of Historic Places. 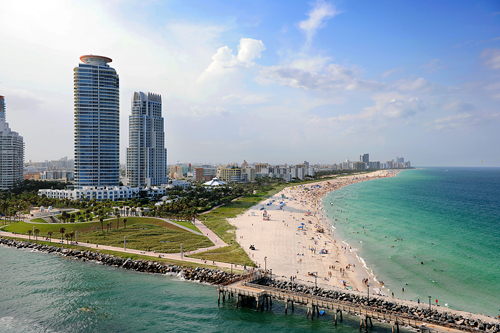 Most travelers do not visit Miami itself, but rather Miami Beach, an entirely separate municipality. Miami is on the mainland, while the city of Miami Beach is on a thin barrier island about 6 km (4 mi) to its east, across Biscayne Bay – locals call it the Billion Dollar Sandbar. Miami Beach is connected to Miami by several causeways.

Called the American Riviera, Miami Beach is known for its year-round sun and fun. But Miami Beach is more than just sandy beaches and sparkling ocean. It is a cosmopolitan city, which is home to many world-class restaurants, modeling, film and recording industries, and pulsating nightlife.

Miami Beach was once a coconut plantation. In 1909, John S. Collins, known as the Father of Miami Beach, set sights on the failing plantation, bought out the property and helped build it into a beachfront town.

Between the ’20s and ’50s, Miami Beach became known as a gambling center. During World War II, the city became more of a military base.

In the ’70s, parts of Miami Beach also became a veritable retirement center, especially among the country’s Jewish community. But by the early ’80s, other portions, including the Art Deco District, turned into slum areas, as Miami Beach became a main port for drug smuggling.

Miami Beach of the present is a hub for the film industry and its biggest stars; houses more than 35 modeling agencies; and has become a prime vacation spot for travelers, young and old.
Miami Beach – Art Deco District

One of the main Miami Beach’s attractions is the Art Deco Historic District. This district encompasses one square mile of South Beach. It is a collection of bright pink, lavender and turquoise buildings dating from the 1920s.

These buildings are soaring examples of pre-war modernism with characteristic rounded corners and geometric ornamentation. Some of the most fascinating of these buildings are the hotels, many of them restored and decorated to fit their original look. The highlight of the district is the strip of hotels along Ocean Drive between 5th and 15th street.

The Art Deco Historic District is in the heart of funky South Beach (SoBe), the southwestern section of Miami Beach. Aside from the fact that South Beach attracts a growing number of visitors each year, it is also a well-known hot spot for gay and lesbian travel.