205 Whitehead Street 305-294-2116
When the noted ornithologist and nature illustrator John James Audubon visited the Keys and the Dry Tortugas in 1832, he visited the gardens of this impressive home. Built by Captain John Geiger, master wrecker and harbor pilot, for his wife and nine children, the home exists as a fine example of the level of luxury known to many citizens of Key West during the wrecking era. The home also represents the first historical restoration completed on the island.

Whitehead, Front, and Greene Streets · FREE
When William Adee Whitehead surveyed the island and plotted the city in 1829, he “created” Clinton Place – named after DeWitt Clinton, Governor of New York and master planner of the Erie Canal. In the words of Jefferson Browne from 1912; ” the small triangular plot at the intersection of Front, Whitehead and Greene Streets was dedicated by the original proprietors to the use of the public. In 1886, the Army and Navy Club of Key West erected a granite monument to the officers and men of the Union army, navy and marine corps, who died at Key West from 1861 to 1865.” The triangle today is beautifully maintained and is a perfect little pocket of Key West history you can explore.

511 Caroline Street · 305-294-5349 www.currymansion.com
Tour the home of Florida’s first millionaire and find yourself surrounded by 19th-century luxury – gorgeous woodwork, Tiffany glass, magnificent furniture, even solid-gold flatware! And by taking an up-close look at just one of Key West’s early families, you’ll get a good idea of what life was like on the island more than a century ago. But this house is more than just the home of the very successful Curry family – it’s also the birthplace of the key lime pie.

70 miles west – accessible by boat and seaplane
More than seven islands comprise the Dry Tortugas National Park. Fort Jefferson, the behemoth structure begun in the 1840s and never finished, maybe visited daily. A must for history buffs – a unique defense outpost AND the military prison that served as home to Dr. Samuel Mudd and two other Lincoln conspirators. A visit to Fort Jefferson makes for a fascinating, full day.

3501 South Roosevelt Boulevard · 305-296-3913
This Civil War-era fort turned museum now offers a fascinating look at many chapters of early Key West history – the Native American years, the settlers, even the cigar maker era. This is also the residence of Robert the Doll, guilty childhood “pal” of Key Wester Eugene Otto.

West end of Southard Street · 305-295-0037
Another of Key West’s great forts, this one boasts the largest collection of Civil War Cannons yet found. Visit and learn of the Union occupation and blockade – tours are given daily. Then stay and enjoy the beautiful beach.

Everywhere · FREE
Wherever you go on the island, you’re surrounded by historical markers. They stand in front yards and by the side of the road, next to docks and on the walls of buildings. All are interesting and some are funny. While you’re glancing in all directions for little bits of history to read, also notice the awards for restoration proudly displayed near the front doors of many private homes.

Wall Street at Mallory Square · FREE
A calm oasis with benches for resting while you contemplate the thirty-six busts of the men and women who have had the greatest impact on Key West, by sculptor James Mastin. Take a few moments to read the individual biographies and view the huge sculpture of a wrecking crew – combined, they serve to give you a thumbnail sketch of the island’s history.

One Free School Lane – 305-294-0015 – donation
Lose yourself in the lush, overgrown property that held Key West’s first school a hundred years ago. Now it’s an off-the-beaten-path treasure in the middle of the action – mere steps away from Simonton Street between Fleming and Southard. Observe tropical flora and fauna in their natural habitat, and meet some fascinating birds. It’s all part of a wonderful escape from the busy town that surrounds it.

322 Duval Street · 305-294-9501 · FREE
In 1836 this home was the only structure located south of Caroline Street in the busy seaport of Key West. Owned by Captain Francis Watlington, the house remained in the family until 1974. Now you can tour the home and gardens while imagining living in a home where your kitchen is a separate building in the back yard.

Higgs Beach, Atlantic Boulevard
A large monument stands to commemorate the deaths of 294 Africans who passed away while in the care of U.S. Marshal Fernando Moreno and the citizens of Key West in the summer of 1860. In April and early May, three slave ships were captured on their approach to Cuba and the people on board were brought to Key West. Here, in a town of 3000 people, tents were erected and a hospital was built to care for them, and the residents donated food and clothing. Then, after much discussion in the United States Congress, the American Colonization Society was contracted to transport the Africans to Liberia. Weather conditions prohibited any trans-Atlantic crossings for most of the summer, and while the fourteen-hundred-and-forty Africans waited in Key West, many died as a result of illnesses contracted during their passage from Africa – primarily a lung disease, typhoid fever, and dysentery. They were buried here and, after the West Martello Tower was built nearby in 1863, the location of the cemetery was forgotten. An archaeological team, using Ground Penetrating Radar, confirmed the location of fifteen graves in 2002. They lie beneath the marker.

1 Whitehead Street · 305-296-2051
Opened in February of 1935, the Key West Aquarium was the first of its kind in the world – an open-air display of exotic sea creatures, with holding tanks exposed to natural sunlight as water from the ocean circulated through them. When you walk under the awning and into the Aquarium today, let your mind go back to a time when Key West, having filed bankruptcy just a year earlier, was now pinning its future on this newfangled display of tropical fish and the visitors they hoped to draw. Think 1935, and be captivated by all you see.

Bordered by Angela, Frances, Olivia, and Margaret Streets, and Windsor & Passover Lanes. · FREE
These nineteen acres hold a wealth of Key West’s history in their various plots, mausoleums and ornate graves. In the far corners opposite the entrance are the Catholic and Jewish Cemeteries. Look for the plot dedicated in 1900, with its bronze sailor standing sentinel, to the 1898 sinking of the USS Maine in Havana Harbor. Seek out the plot dedicated to the Cuban Martyrs of 1868, with its memorial from1892. Family plots include beloved pets, and each gravestone tells a story. Many names will be familiar to regular readers of KWHx. Shown in the paragraph above, is the plot for one of Key West’s Masonic Lodges.

938 Whitehead · 305-294-0012
Climb eighty-eight steps to the top of the Lighthouse and take in the view. No, you can’t see Cuba, but you can see connections to Key West’s past as you look in each direction. Be sure and tour the house – where you’re surrounded by breathtakingly beautiful Dade County Pine – then imagine what it was like as a three-family home.

The Key West Turtle Museum at the Cannery

200 Margaret Street · 305-292-0209
Fascinating artifacts from the turtle fishing industry – including some dredged from the waters just outside this building – are on display alongside a look at current conservation efforts for area turtles.

111 Front Street 305-294-9911
trumanlittlewhitehouse.com
Jefferson Browne, in Key West: The Old and the New, wrote “in 1890 a double house was built . . . for the use of the commandant and paymaster of the (Naval) station,” with wrap porches and louvered shutters to take full advantage of the trade winds. The home became the perfect getaway for our 33rd President, Harry S. Truman – he would spend eleven working vacations at the “Little White House” while holding office. Presidents Eisenhower and Kennedy both used the home for meetings, while Presidents Carter and Clinton have enjoyed the home’s hospitality. Now you may walk where presidents have walked before you and tour this very comfortable home.

Truman Waterfront – west end of Southard Street · 305-292-5072
Get a glimpse of Key West’s Twentieth Century history when you tour both a WWII escort and the WWII convoy ship that, in 1942, sank the German U-boat 626. Both ships offer a close-up look at the minutiae of daily life aboard the ship. The Ingham is also the National Memorial to Coast Guardsmen Killed in World War II and Vietnam and displays a plaque to those 912 on the quarterdeck.

It takes place at Mallory Square every night around two hours before sunset. Masses of people, both locals and tourists alike, flock to the water’s edge to experience a multicultural happening and to watch the sun sink into the Gulf of Mexico. The participants of this Key West attraction consist of arts and crafts exhibitors, street performers, food carts, psychics and of course the thousands of tourists from around the world who gather to celebrate nature’s most spectacular show. We recommend you make Sunset Celebration your first stop on your evening out on the town!

On Sunday afternoon in February of 1935, the grand opening of the Key West Aquarium was held. Conceived by Dr. Van Deusen, a director of the Fairmount Park Aquarium in Philadelphia, the Aquarium had been a cornerstone project of Julius Stone and FERA to create a tourism industry (the Aquarium would be Key West’s first attraction) and to put Key Wester’s back to work after the city declared bankruptcy in 1934. It was the first aquarium of its kind in the world – glass holding tanks were exposed to natural sunlight as ocean water pumped through them. The tanks were populated with, as the Miami Herald described it, “hundreds of varieties of strange and queer specimens of fishes.”

Between the building and the water, two 22′ X 28′ crawls were built to hold sharks, porpoises and large turtles – a 617-pound Jewfish was already in residence. A crawfish hatchery also stood outback, where a crop of millions of Florida lobster was anticipated yearly. That potential income and admissions from the Aquarium itself promised a good return for the city of Key West on the federal government’s investment in its future. The Aquarium was also in the tropical fish business. Specimens would be removed from local waters, warehoused at Key West, then sold and shipped out to Aquariums around the country. Marine biologists would, in turn, travel to Key West to study tropical marine life in its natural habitat. 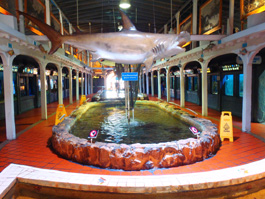 Building and opening an aquarium was quite an undertaking for the city of Key West. Federal relief funds available for projects in Florida were earmarked for it, and volunteer labor did the construction and landscaping work. The Mallory Steamship Company donated a tract of land next to the building site for development as part of the Aquarium property. The city of Key West would heretofore be in the Aquarium business.

Now, seventy-six years since its opening, the Aquarium is still a fascinating attraction. The tanks are still fed by constantly circulating ocean water. Visitors still gaze at the “strange and queer” fish, although a roof went on the building in 1967 after experiments in covering it with thatches failed. Although the Aquarium no longer supplies the world with lobsters or wholesales tropical fish, the visitors still come. A relatively small investment of federal relief funds and the dedication of residents willing to sweat for free and build this new fangled Aquarium in 1935 paid off handsomely. Its opening helped turn the tide of the Depression and put the Southernmost City on the tourism map – a position Key West maintains today.