The music of salsa and merenga, aroma of cafe cubano and the smell of cigar smoke – Little Havana is an islet of America Latina in Miami.

The area was primarily a Jewish community until about 40 years ago, when in 1959 Fidel Castro seized power in Cuba and thus sparked a mass exodus to the U.S. The “freedom flights” of the 1960s brought thousands of Cubans to Florida’s southern shores and altered the demographic makeup of Miami, the closest urban center.

Little Havana of Miami is not a city within a city, but really a small world unto itself. Spanish is the predominant language here, and you’ll run into plenty of people who speak no English. Although in recent years many Nicaraguans, Hondurans and other immigrants have moved into the neighborhood, it remains a Cuban stronghold where the restaurants, nightclubs, theaters and cigar shops are authentically Cuban. 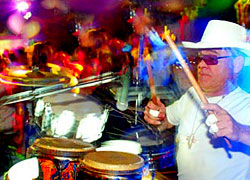 The entire length of Calle Ocho is lined with Cuban shops, cafes, record stores, pharmacies, and clothing and (most amusing) bridal shops. Latin flavor is everywhere. Signs and billboards are in Spanish. Everything is authentic: from the fruit stands and cigar factories to the eat-at windows of the cafeterias where patrons passionately discuss politics.

Over time, the influx of artists and musicians into Little Havana have turned the area into an artistic enclave where Latin American cultures converge.

The Calle Ocho Walk of Fame (between 12th and 17th Avenues), you’ll see the sidewalk of stars for top Latin celebrities like Celia Cruz, Gloria Estefan and Julio Iglesias.

Every March, as part of Carnaval Miami—the world’s largest street festival, more than one million people attend an enormous street party known as the Calle Ocho Festival featuring music, dancing, and food from every corner of the Latin world.

Artists are especially attracted to Little Havana by relatively inexpensive rents. The artist community is showcased on Viernes Culturales (Cultural Fridays), an open-air art festival which takes place on the last Friday of every month along Calle Ocho.

Calle Ocho’s tourist district exudes color with its bustling pedestrian life, and many popular cafeterias have outside service windows.

The architecture of Little Havana features a large collection of bungalows, which were a popular Miami style in the 1920s.

There are dozens of cigar shops along Calle Ocho, where you can see cigars being hand-rolled and bearing family-owned labels that date back to the 1930s.

Cultural activities are blossoming along with art galleries, studios and theaters. Cultural Fridays take place the last Friday of each month along Calle Ocho and feature music, dance, poetry, visual arts and theater. The historic Tower Theater is alive with performances, cultural and educational programs and multicultural films while Teatro Ocho is home to Spanish-language theater.

Artists are especially attracted to Little Havana by relatively inexpensive rents. The artist community is showcased on Viernes Culturales (Cultural Fridays), an open-air art festival which takes place on the last Friday of every month along Calle Ocho.

One of the most photographed areas of Little Havana is Domino Park, also known as Maximo Gomez Park, named in honor of the Dominican-born general who was chief of the Cuban Liberation Army during the wars of independence against Spain. Cubans gather daily to play dominoes, drink Cuban coffee and reminisce about the old days in Cuba. Domino Park, the Tower Theater and the Latin Quarter Cultural Center converge at the intersection of Southwest Eighth Street and 15th Avenue to form the cultural Mecca of Calle Ocho. 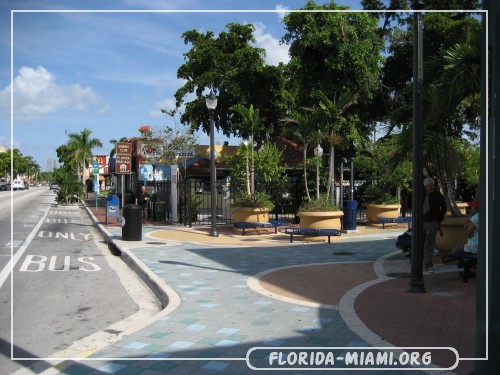 Maximo Gomez Domino Park (named after a revolutionary who fought against the Spanish in Cuba in the early 1900’s) is an import meeting place in Little Havana for the Cuban community. The park is set up with a number of domino and chess tables for the many clubs that come to play here on a daily basis.

The Domino Park was built back in 1976 to provide a meeting place for everyone living on Calle Ocho. Originally, everyone would get together across from the Tower Theatre. A few guys would go around and rig up some lighting anticipating the dark night ahead. Some old ragged tables would get hunted down within the neighborhood. Then, it was game time!

The mostly Cuban population in Little Havana would get together and play dominos the same way as they did back in the old country. Stories from back in Cuba would get passed down to the younger generation as everyone just sat around and played a good old game of dominos.

Little Havana is the best place in Miami to try Latin cuisine. There are a variety of restaurants serving authentic Cuban dishes and delicacies and others serving traditional Spanish, Mexican, Peruvian, Colombian and Argentinean food. Take a great plate of lechon asado con platinitos maduros y congris (roast pork with fried plantains and rice and beans). If you’re not quite as hungry, just sidle up to one of the open-air lunch counters and order a medianoche, sandwich cubano or some empanadas.